Liftbridge is a durable stream augmentation for NATS, so it's important to have a good grasp of the key concepts in NATS. NATS is a pub/sub messaging system that centers around the concept of subjects. Clients publish messages to subjects and receive messages from subscriptions to subjects.

Fundamentally, Liftbridge is just a consumer of NATS subjects. It receives messages received from NATS subjects and records them in a durable log which is then exposed to subscribers. Specifically, Liftbridge centers around the concept of a stream, which is a durable message stream attached to a NATS subject. A stream consists of one or more partitions, which are ordered, replicated, and durably stored on disk and serve as the unit of storage and parallelism in Liftbridge.

Streams have a few key properties: a subject, which is the corresponding NATS subject, a name, which is a human-readable identifier for the stream, and a replication factor, which is the number of nodes the stream's partitions should be replicated to for redundancy. Optionally, there is a group which is the name of a load-balance group for the stream to join. When there are multiple streams in the same group, messages will be balanced among them.

There can be multiple streams attached to the same NATS subject, but stream names must be unique within a cluster.

Each partition has its own message log, leader, and set of followers.

Each stream partition is backed by a durable write-ahead log. All reads and writes to the log go through the partition leader, which is selected by the cluster controller. The leader sequences each message in the partition and sends back an acknowledgement to publishers upon committing a message to the log. A message is committed to the log once it has been replicated to the partition's in-sync replica set (ISR).

Consumers read committed messages from the log through a subscription on the partition. They can read back from the log at any arbitrary position, or offset. Additionally, consumers can wait for new messages to be appended to the log.

Liftbridge is designed to be clustered and horizontally scalable. The controller is responsible for creating stream partitions. When a partition is created, the controller selects replicas based on the stream's replication factor and replicates the partition to the cluster. Once this replication completes, the partition has been created and the leader begins processing messages.

As mentioned above, there can exist multiple streams attached to the same NATS subject or even subjects that are semantically equivalent e.g. "foo.bar" and "foo.*". Each of these streams will receive a copy of the message as NATS handles this fan-out.

With this in mind, we can scale linearly by adding more nodes to the Liftbridge cluster and creating more streams which will be distributed amongst the cluster members. This has the advantage that we don't need to worry about partitioning so long as NATS is able to withstand the load. The downside of this is that it results in redundant processing of messages. Consumers of each stream are all processing the same set of messages. The other issue is because each stream is independent of each other, they have separate guarantees. Separate leaders/followers, separate ISRs, and separate acking means the logs for each stream are not guaranteed to be identical, even though they are bound to the same NATS subject.

To accommodate this, streams are partitioned. By default, a stream consists of just a single partition, but multiple partitions can be created for increased parallelism. Messages can then be delivered to partitions based on their key, in a round-robin fashion, randomly, or with some other partitioning strategy on the client.

Currently, replicas in Liftbridge act only as a mechanism for high availability and not scalability. However, there may be work in the future to allow them to act as read replicas for further scale out.

The diagram below shows a cluster of three servers with a set of streams. Partitions in yellow indicate the server is the leader for the partition. 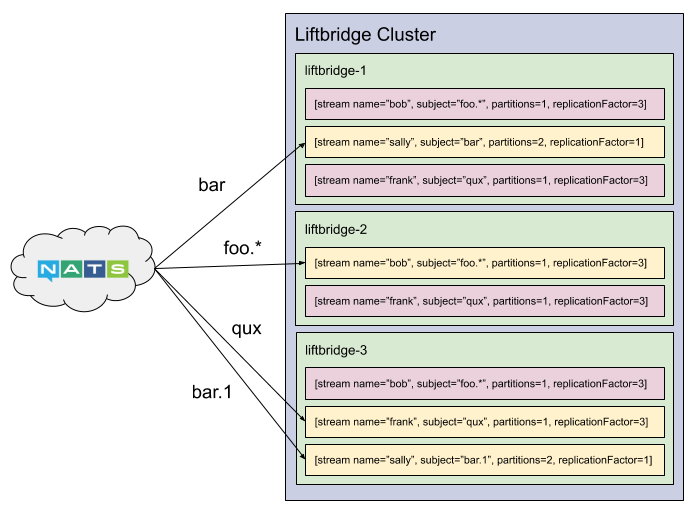 In order for a message to be committed to a partition's write-ahead log, it must be acknowledged by all brokers in the ISR. To prevent a single slow broker from blocking progress, replicas that fall too far behind the leader are removed from the ISR. The leader does this by making a request to the controller. In this case, the cluster enters an under-replicated state for the partition.

Being "too far behind" is controlled by the replica.max.lag.time configuration. This refers to both the maximum amount of time a replica can go without making a replication request before it's removed and the amount of time that can pass without being fully caught up with the leader before it's removed. When a removed replica catches back up with the leader's log, it is added back into the ISR and the cluster goes back into its fully replicated state.

Under normal conditions, only a replica from the ISR can be elected the leader of a partition. This favors data consistency over availability since if the ISR shrinks too far, there is a risk of being unable to elect a new leader.

Acknowledgements are an opt-in mechanism to guarantee message delivery. If a message envelope has an AckInbox, Liftbridge will send an ack to this NATS inbox once the message has been committed. This is used to ensure at-least-once delivery.

Messages can also have an optional CorrelationId, which is a user-defined value which is also set on the server ack to correlate it to a published message.

There are a couple of things to be aware of with message acknowledgements. First, if the publisher doesn't care about ensuring its message is stored, it need not set an AckInbox. Second, because there are potentially multiple (or no) streams attached to a NATS subject (and creation of streams is dynamic), it's not possible for the publisher to know how many acks to expect. This is a trade-off we make for enabling subject fan-out and wildcards while remaining scalable and fast. We make the assertion that if guaranteed delivery is important, the publisher should be responsible for determining the destination streams a priori. This allows attaching streams to a subject for use cases that do not require strong guarantees without the publisher having to be aware. Note that this might be an area for future improvement to increase usability. However, this is akin to other similar systems, like Kafka, where you must first create a topic and then you publish to that topic.

Subscriptions are how Liftbridge streams are consumed. A client subscribes to a stream partition and specifies a starting offset to begin consuming from. At this point, the server creates an ephemeral data stream for the client and begins sending messages to it. Once it consumes up to the end of the log, the server will wait for more messages to be published until the subscription is closed by the client.

Subscriptions are not stateful objects. When a subscription is created, there is no bookkeeping done by the server, aside from the in-memory objects tied to the lifecycle of the subscription. As a result, the server does not track the position of a client in the log beyond the scope of a subscription. Stateful consumer groups will be coming in the near future which will allow a consumer to pick up where it left off and provide fault-tolerant consumption of streams.

Additionally, Liftbridge supports log compaction. Publishers can, optionally, set a key on a message envelope. A stream can be configured to compact by key. In this case, it retains only the last message for each unique key. Messages that do not have a key are always retained.

The controller is the metadata leader for the cluster. Specifically, it is the Raft leader. All operations which require cluster coordination, such as creating streams, expanding ISRs, shrinking ISRs, or electing stream leaders, go through the controller and, subsequently, Raft to ensure linearizability. Raft automatically handles failing over the controller in the event of a failure for high availability.

Note that in order for the controller to make progress, a quorum (majority) of the brokers must be running.

Controller is also referred to as "metadata leader" in some contexts.

Liftbridge extends NATS by allowing regular NATS messages to flow into durable streams. This can be completely transparent to publishers. However, it also allows publishers to enhance messages by providing additional metadata and serializing their messages into envelopes. An envelope allows publishers to set things like the AckInbox, Key, Headers, and other pieces of metadata.