NOTE: The consumer groups API is currently in beta.

When a consumer in a consumer group fails, the group's coordinator will reassign the partitions the failed consumer was subscribed to to another member of the group. This allows for fault-tolerant consumption of streams. Consumers will automatically (or, if configured, explicitly), checkpoint their position in the partitions they are consuming such that if they fail, they or another consumer in the group can pick up where they left off.

Consumer groups are associated with an ID. When a consumer is created, it specifies a group ID to join. If the group does not exist, it is created automatically. Consumers specify a set of streams to consume. The group coordinator then assigns stream partitions to consumers in the group. Each partition is assigned to only one consumer in the group such that partitions are balanced amongst the group members. In order to have multiple consumers consuming the same partitions, separate groups should be used.

Below are a few patterns that can be implemented using consumer groups.

Consumer groups provide a way to consume an entire stream (or multiple streams) with a single subscribe call. In this case, a single-member group is used by specifying a unique group ID when creating the consumer. This means all of the partitions for the streams the consumer subscribes to will be assigned to the consumer because it is the sole member of the group. 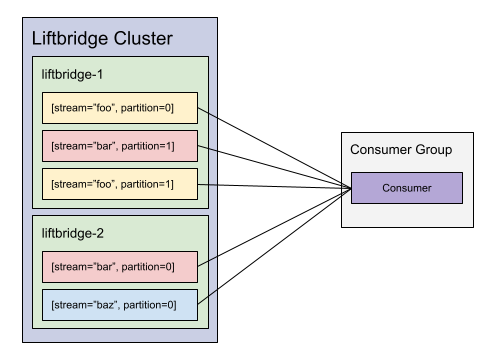 When a Liftbridge client subscribes to a partition, it must track its position in the partition if it needs to be able to resume where it left off in the event of a failure or shutdown. This can be done using cursors API, for instance. However, the cursors API is a low-level API and requires the client to implement logic for saving its position.

Consumer groups solve this problem by automatically and transparently checkpointing the consumer's position for the partitions it consumes. In the event the consumer fails or shuts down, it or another member of the group can pick up where it left off.

In Liftbridge, streams are partitioned in order to provide parallelism. This means we can increase throughput by distributing load across multiple partitions which can then be consumed independently by different subscribers. This can be a lot of complexity to manage with normal subscriptions. Consumer groups are designed to address this.

A consumer group consists of one or more consumers. The members of the group can balance the load of a stream by having each member subscribe to the stream. The group coordinator will then assign the stream's partitions to the members of the group such that the load is distributed evenly across the group. Each time a new consumer is added to the group or consumers leave the group, the coordinator will ensure assignments are balanced. 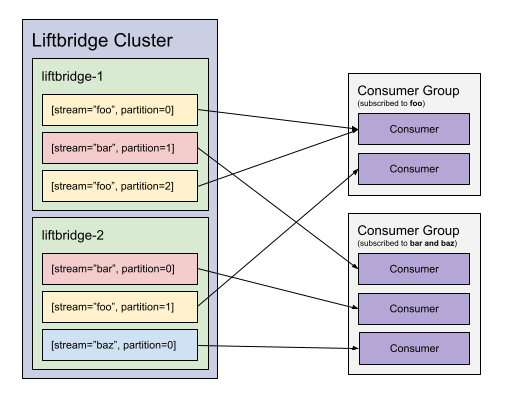 In addition to balancing stream load, consumer groups also provide a means for fault tolerance. A simple example would be a consumer group with two members, each subscribed to the same stream. For simplicity, let's say this stream only has a single partition. In this case, only one of the group members would actually be assigned the partition for consumption. The other member would be in standby, ready to take over consumption of the stream if the assigned member fails or otherwise leaves the group. This allows us to implement highly available stream processing.

Configuration settings for consumer groups are grouped under the groups namespace. See the full list of configuration options here.

Consumer groups rely on cursors which are stored in an internal Liftbridge stream named __cursors. This stream is not intended to be accessed directly. By default, the internal __cursors stream is disabled. To enable it, you must set the number of partitions to something greater than 0:

Additionally, partitions in the __cursors stream automatically pause when they go idle (i.e. do not receive a cursor update or fetch) for 1 minute by default. This can be changed or disabled with the cursors.stream.auto.pause.time setting: